One of the best reasons to be involved with social media marketing is that there’s always something new to learn and explore. Of course, many of our readers will be familiar with the concept of dark posts, whether that’s on Facebook or an alternative platform. But, for those who aren’t, especially those who are still using boosted posts, there’s an opportunity for even better results.

There are certain similarities between boosted posts and their dark counterparts. Both represent paid advertising on the platform to position posts in the feeds of your target audience. However, the critical difference is that dark posts exist as ads and nothing else. They don’t appear on your regular feed, and they don’t go out to people that follow you already – unless they fall into the specified target audience.

Conversely, regular boosted posts involve taking something you’ve already posted to Facebook and paying for further reach. If you’ve experimented with boosted posts already, alongside conventional Facebook advertising, you’ll know that there are nowhere near as many options with the former as the latter. Dark posts represent something of a middle ground, whereby your paid posts benefit from all the flexibility of ads while still appearing in the main feed.

1. They’re Perfect for Targeting Without Disturbing Your Full Audience

You’ve probably segmented your audience in dozens of ways already. Dark posts enable you to communicate directly with those segments without compromising everyone else. Boosted posts require a more general tone regardless of who you target, as anyone that visits your page will be able to see them. With dark posts, you can target people of certain ages, in specific job roles, or even an exact location. You can use a VPN to emulate their location, too, to see firsthand how your post appears and what other local promotions appear nearby.

END_OF_DOCUMENT_TOKEN_TO_BE_REPLACED

E-commerce has seen an immense boost within the last year and a half. Numerous merchants have turned to an e-commerce giant Shopify to build their online presence and keep up with the market demand. Just a month after the pandemic peaked in March 2020, the number of new stores in Shopify grew by 62%.

One of the reasons Shopify has become a preferred e-commerce platform is that it offers many opportunities (plug-ins and apps) for beginners and professionals alike to enhance and promote their online stores.

With thousands of apps to choose from, it’s possible to get started with a dropshipping business, add customer reviews, improve marketing strategies, boost customer support, add AI chatbot software, and much more.

We have highlighted 7 of the best Shopify apps based on their reviews, ratings and potential that merchants can add to their store – both for advancing their workflow and also boosting their overall customer experience.

END_OF_DOCUMENT_TOKEN_TO_BE_REPLACED

Social media has become a vital component of business plans for companies of all sizes. No longer is managing feeds and engaging with customers something added to the intern’s never-ending to-do list. Instead, larger companies have entire teams dedicated to keeping their followers up-to-date, and there’s absolutely no shortage of specialist freelancers to get the word out about you and your products.

Most of these dedicated social media workers know what they’re doing. However, a surprising number of them overlook one crucial tool that can help them reach their goals. It’s none other than a VPN. More commonly associated with accessing geo-filtered content and general data privacy, it can prove pivotal in taking your social media strategy to the next level. Here’s how:

Any business that regularly posts on social media can struggle to come up with new ideas. Fortunately, there’s nothing wrong with sharing or repurposing content from others. Pictures, articles, and videos all fit the bill, but you don’t want to be subject to arbitrary restrictions when finding things that would be great for your social feeds.

END_OF_DOCUMENT_TOKEN_TO_BE_REPLACED

Tagged with PPC
Spread the love

Creating an effective PPC campaign is not an easy task, no matter how many times you have done so. From keyword research to product ads and landing page creation, creating a successful PPC campaign is time-consuming and entails a lot of hard work.

Thankfully, Google has come up with several impressive PPC tools that have reduced the amount of time and work that you initially had to put into creating such campaigns. So, if you are an advertiser who has to deal with PPC campaigns of your company or your clients, then this article is for you!

In this article, we will talk about some of the most efficient and best Google Ads tools that will save you a lot of time and effort for creating campaigns. With the help of these tools, you will no longer have to do anything manually; you can simply skip these tedious tasks with the help of these in-built Google Ads tools and automate your PPC campaigns.

END_OF_DOCUMENT_TOKEN_TO_BE_REPLACED

While other marketing channels keep showing up, making a lot of noise before gradually disappearing, email continues to be the go-to channel for digital marketers. With the potential to generate $40 for every $1 spent, a number that far outweighs its nearest rivals, it’s no surprise that a well-stocked, carefully-curated email list is the ultimate prize for ecommerce marketers everywhere.

But while we all want an endless source of targeted and highly engaged email subscribers, a lucrative goose that lays golden eggs of revenue, actually building a great email list is much easier said than done.

In this article, we’ll discuss some email list-building best practices, learn what you should avoid during the process, and present some useful, easy-to-implement tactics for getting your list off the ground and crafting it into the revenue-driving machine that it promises to be.

END_OF_DOCUMENT_TOKEN_TO_BE_REPLACED

Vaibhav Kakkar by the Founder and CEO of Digital Web Solutions, a globally trusted agency with a full suite of digital marketing services and development solutions.

All posts from Vaibhav Kakkar
Posted in

Do you know that there are over 570 million blogs on the internet, with 7 million + blogs being published every day?

Blogs allow creators to connect with their readers on a more intimate level and share thoughts or opinions from a personal standpoint. You can also offer a “comments” section where readers may engage with the author by asking questions or expressing their thoughts.

This is probably one of the biggest advantages of blogging. This interaction, if maintained properly, can skyrocket viewers’ engagement and encourage them to keep coming back for more.

This ability to hold viewers attention and present a flexible communication platform has made blogs a crucial part of modern-day marketing as well. This is especially true for eCommerce stores as their entire business model is based on attracting qualified traffic to their websites.

END_OF_DOCUMENT_TOKEN_TO_BE_REPLACED

In the last decade, eCommerce has reshaped the modern marketing scene. Shopping online has become the new normal for the digital native consumer and Ad-targeting is quickly shifting from our shop windows to our social media pages in an attempt to grasp a new digitally connected demographic.

After Covid-19 shut the doors of many leading brick and mortar retailers in 2020, the number of e-commerce based retailers have only increased, shifting from just 19% in February 2020 to over 35% in just a year. 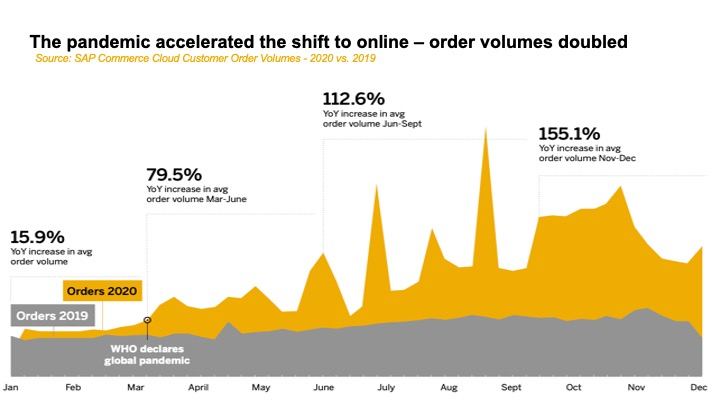 (Source: The Future Of Commerce)

As trends continue to shift post-pandemic, the return of in-store consumer traffic will majorly depend on the ever-changing growth and development of the eCommerce market and how business leaders handle the demand to create strong direct-to-consumer connections going forward.

As the competitiveness of eCommerce continues to ramp up, the obvious solution may be to join the growing digital train, but before you hang the closed sign on the shop door, it’s time to evaluate the pros and cons of entering the online retail experience.

END_OF_DOCUMENT_TOKEN_TO_BE_REPLACED

All posts from Stefan Smulders
Posted in

Courting a romantic interest and connecting with a potential customer are similar in many ways. You have to anticipate their needs and take the right steps to build a long-lasting connection. Otherwise, the relationship will fizzle out before you know it.

To take your business to the next level, it’s crucial to identify prospects and get them interested in your products and services. However, cold emails and unsolicited calls hardly ever make a positive impression.

In today’s digital world, it’s time to leverage social networking platforms to your advantage. In particular, LinkedIn has emerged as one of the most effective ways to nurture and strengthen customer relationships.

Whether you are new to the platform or your past attempts to win over buyers have failed, here are some blunders costing you valuable prospects. Let’s dive in.  END_OF_DOCUMENT_TOKEN_TO_BE_REPLACED

SEO is essential if you want to grow your online presence and your business. But it’s also complicated and multi-faceted. It’s taken me years to get to the level of SEO expertise I have now, so if you’re just starting out, I wouldn’t be surprised if you’re feeling a bit daunted.

Perhaps you are brand new to SEO and want to avoid the common pitfalls and mistakes before they happen. Or perhaps you’ve been doing it for a while, but you haven’t seen the results you want – or, worse, you’ve incurred a Google penalty! Either way, this article will help you. Read on to learn about the most commonly overlooked SEO problems and how you can fix them.

END_OF_DOCUMENT_TOKEN_TO_BE_REPLACED

More and more companies experiment and implement digital technology to improve their businesses and ensure growth. What many fail to realize is that the first step to digital transformation is actually transforming their content strategies.